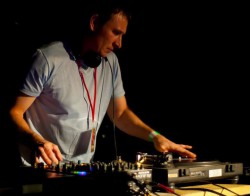 DJ Wise started DJing in 1986 after watching the classic Hip-Hop film Wild Style. DJing quickly became an obsession, practising at any given opportunity mostly through the night into the early hours. He started off cutting and scratching up breakbeats, moving onto Electro Funk then progressing into Hip-hop & Rap. In 1992 he was drawn more and more to a new sound known as Hardcore/Jungle. His first break playing Jungle music to an audience came in 1993 on a local pirate radio station called Trance FM. It was that year the scene started to explode jungle club nights and raves were packed out every weekend, the vibe was incredible, getting noticed in clubs and being praised for what he was doing was an incredible buzz. After a few years Trance unfortunately closed down but as one door closed another one opened, the legendary Dream FM 107.6 was born. DJ Wise was on Friday and Saturday nights alongside MC Zoukie Banton, the show had a huge following. Joining Dream was one of the most important periods of his DJ career. Bookings went through the roof and he was DJing in venues alongside Andy C, DJ Hype, Groove Rider, Slipmatt to name a few. Dream promoted sold out raves at London venues such as the Rocket, Club Labrynth, Lazerdrome, Linford film studios, Adrenalin Village and Bagleys. The Dream all-nighters were legendary this is something he’s extremely proud to have been a part of and looks back on those times with great fondness. The station broadcast between 1994 and 1998 from South West London. When Dream shut down he lost interest in DJing and just gave up, 5 years later he missed the buzz and wanted it back, here comes the next chapter……..

For DJ hire you can reach me at: djwisednb@hotmail.com